This is Part Three (the final part) of the story of Merion, the early and unsuccessful offshoot experiment in Twin Oaks history.  If you haven’t already, check out Part One and Part Two–this piece will make more sense if you do.

Up the road from Merion lived an elderly free spirit named Wilma Burroughs. She owned a small farm with a horse, goats, and chickens. Linda and Judy became especially friendly as she helped them get the Merion goat project going. Linda also greatly enjoyed riding her stallion, Mike. Wilma was a freethinker and supported women’s liberation although she had not been active in the movement, having lived a fairly traditional life.

On one of their visits, Wilma advised Linda and Judy that state police had found (or been advised) of a small planting of marijuana, not too far from Merion, and of course the “hippie camp” was the main suspect. The cops were conducting surveillance to catch the culprit. Judy and Linda returned to Merion and advised the group; one of the two growers confessed, the other being away for a few weeks.  It was decided that a large meeting at Juniper, with the whole community, was appropriate, and it was held fairly soon. The result was that everyone unanimously agreed in the future to follow the letter and not just the spirit of the community rule that stipulated “No drugs on the property.” So whereas previously recreational drugs were hidden and sometimes consumed on the properties, in the future all had to make a long trek to the boundaries of the properties and find places to hide their products in holes in the trees or in the ground.

When Damia was one year old, new members joined with a daughter close to her age. Rob was tall, funny, and energetic; he and David were the two black-bearded, long-haired giants of the group.  Karen, his wife, was short and vivacious, enjoying the homesteading types of work at Merion.

Damia was glad to have a companion her age, Moriah.

Also that summer, Daniel (GH) and Linda decided to get married. No one had ever had a public wedding at Twin Oaks, where marriage was considered generally of dubious value. Linda had to attend a meeting at Juniper to explain and defend her action. Daniel’s father was an ordained minister, but didn’t have a license for Virginia. So the local Episcopalian minister in Louisa, a Rev. Williams, came to sign the papers, while Daniel’s father actually presided over most of  the ceremony. Both sets of parents and a large crowd of friends and neighbors were there for the wedding, held just north of the farmhouse under a huge white oak tree. 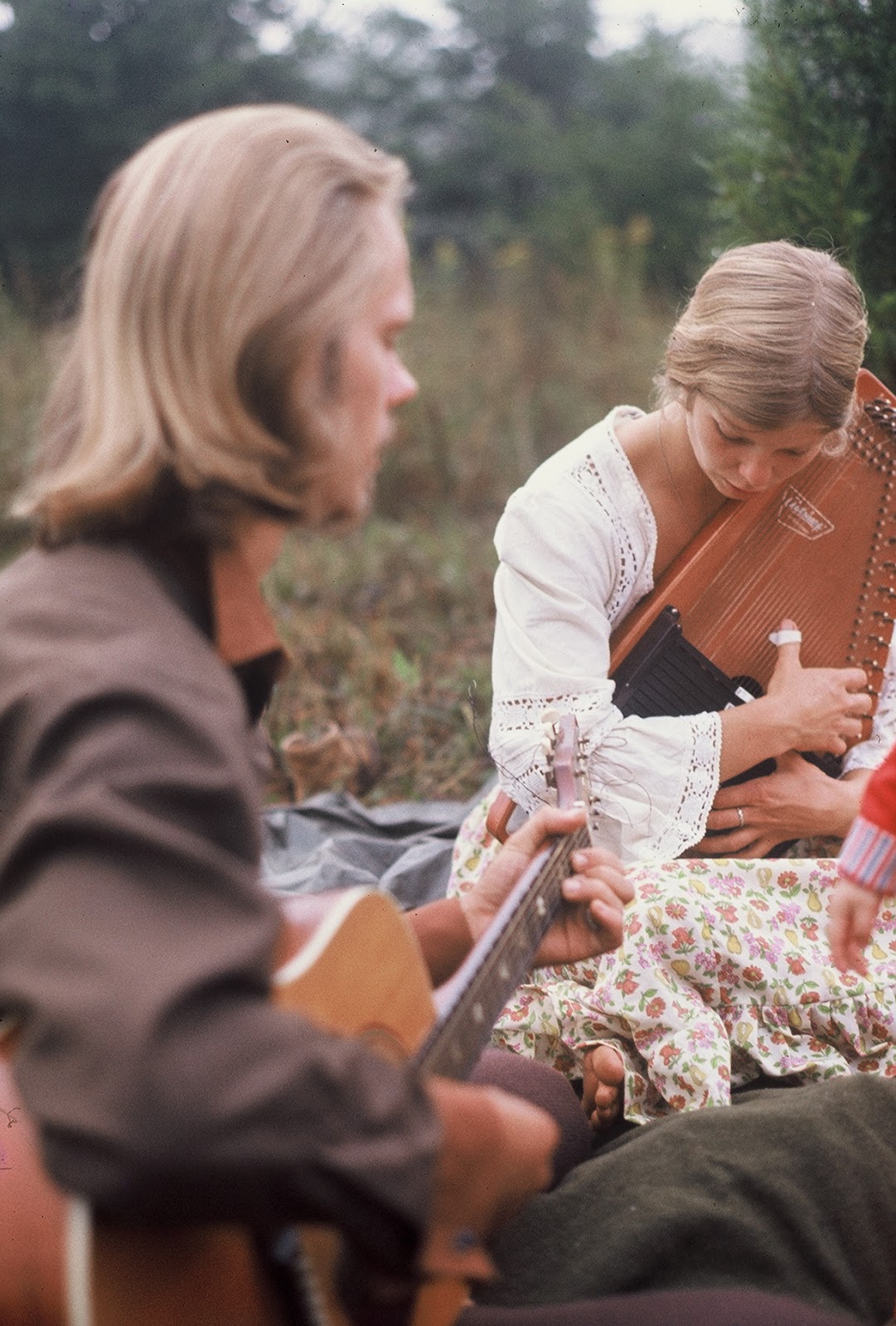 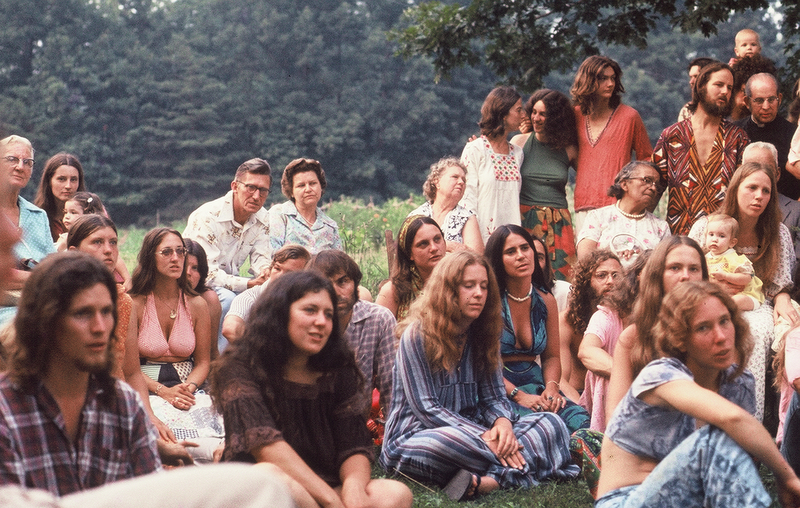 To create more individual living spaces, both Will and Holly built new cabins.  Will’s cabin was later moved to Twin Oaks as a meditation and getaway space.

The influence of Gaskin’s Farm’s view of group marriages was intensified by the new members, Rob and Karen, who advocated strongly for multiple relationships. Daniel, who had been raised with fundamentalist Christian values (though he mostly rejected them) had difficulty accepting the new cultural norms as he saw his friends adopting the new ways. He also strongly wanted children (though Linda was ambivalent) and knew he could not accept the authority of Twin Oaks’ Child Board, which at that time tended to be discouraging of biological parents’ involvement. Over the course of the year, he became more and more disillusioned with Merion and eventually persuaded Linda to leave with him, which they did in June of 1976.

Gardner had been in love with Donna, a Juniper member, for some time, and he also left Merion to go live at Juniper.  They later moved to the Pacific Northwest, driving good old Bullfrog across the country. 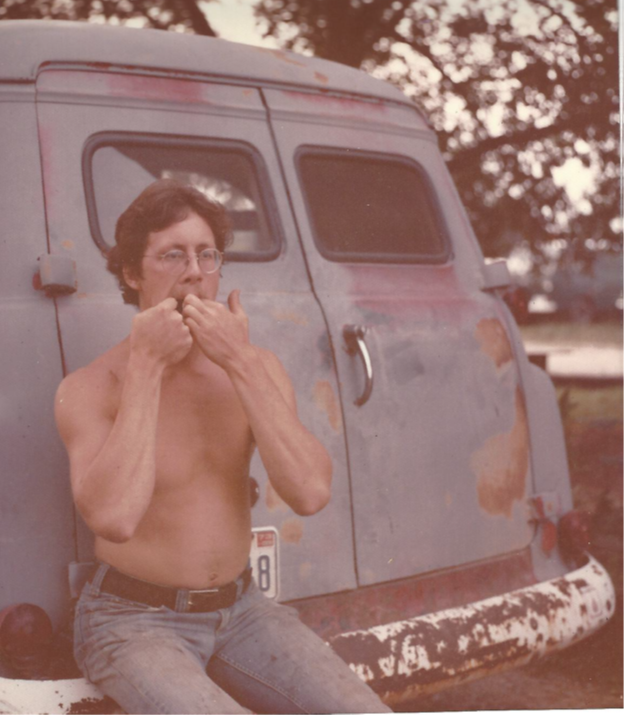 In August 1977, Will and Kristine decided to leave as well. They became caretakers of “Oakley,  a nice house west of Louisa, and after three weeks, David joined them there.

In 1977, a member of Juniper, Phoenix and her son Noah, and moved up to Merion, as did one of the “metas”, Casey. A young man named Jeffrey joined briefly, and also Carolyn and Joe (or Woody). In 1978, Holly decided to strike out on her own.  She moved  first to a Sikh community near Shipman, then to Cedarwood with Mary for a while, before moving to an old farmhouse owned by Twin Oaks’ neighbors, George and Gordon Badgett. Cedarwood came to an end as a community, but Mary kept renting the farmhouse for a couple of years, and it served as a halfway house for many Twin Oakers when they left; Daniel and Linda, Sara and Warn, Phoenix, Holly, and others. When Blue River Ashram folded, Steve and Laura stayed with Mary for quite a while before moving to Washington DC to study with Swami Muktananda.

As Merion membership dwindled, many must have seen “ the handwriting on the wall.”  It must be imagined that the Twin Oaks planners pondered pulling the plug on this experiment! When Phoenix, with her son Noah, moved near Cedarwood,  the planners decided to sell the property, as Twin Oaks had been able in the meantime to buy many hundreds of acres of land contiguous to the original Jones property.

This account is meant to be as factual and thorough as possible, but any perceptive reader will be aware that negative or controversial personal issues have not been discussed. Merion had interpersonal conflict, as any group of humans will…  Although no doubt of  interest, all of that will be left for others to discuss… or forget!

WHAT BECAME OF SOME MEMBERS…

In 1979, five former members of Merion (Will, Kristine, David, Daniel/Green Heels, Linda) and another friend, Mary, who had lived at Twin Oaks and Cedarwood, bought property together. The group sub-divided the land and formed Baker Branch, a cooperative neighborhood five miles from Twin Oaks. Over four decades, ownership of the individual lots at Baker Branch has changed, but all eight households are still ex-Twin Oakers.

Daniel/Green Heels still lives at Baker Branch.  He retired in 2011 after being a mail carrier in Mineral for 29 years. He maintains a 20 acre wildlife sanctuary, several fairy crossings and one fairy village at Baker Branch.

David became a computer programer and Tai Chi teacher, and lives in Charlottesville, Virginia with his wife, Virginia.

Will and Kristine stayed in Louisa County until they moved to Oregon in 1993.  In Louisa, Will co-founded Hale and White Construction company.  In Oregon, he worked in affordable housing and in local and federal government.

Kristine helped found Moonbeams, a community elementary school in Louisa with Leah.  She was a nurse and midwife in Charlottesville and Oregon.

Linda became a massage therapist and rescued many dogs from the local dog shelter. She died of cancer in 2005.

Argon got his Ph.D.  in tropical diseases, and lived and studied in southeast Asia many years. He is married and currently living in Hawaii.

Damia married her high school sweetheart, Jason. She is a special education teacher, has a son Logan, and lives and works in Louisa.

Gardner married Donna.  They moved to Oregon, and he became a house painter and was deeply involved in Shambala meditation practice.

Holly became a counsellor and Sufi dance teacher and lives in Florida.

Judy became a carpenter and lives in central Virginia.

Leah became a school teacher and lives in central Virginia.

Marijke lived at Celo Community in North Carolina and then rejoined the Bruderhof.

Rachael/Christine became an artist, author, and counsellor and lives in Santa Fe, NM.

Moriah is in school and works at Obrigado.